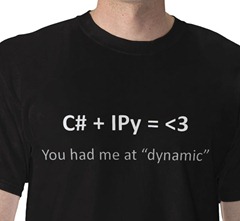 One of the IronPython scenarios that I’m hearing more and more about recently is for polyglot programs. In these scenarios, part of the application is built in IronPython other parts are build in compiled, statically typed languages like C# or Visual Basic. Sometimes, programs are written this way to allow the C# app to access a Python library, like my Pygments for WL Writer plugin. Other programs want to be customizable by the end user, like Intellipad. Whatever the reason, I think that the number of these hybrid polyglot programs is going up, which partially explains why the C# team added the new dynamic type to C# 4.0.

(FYI: the You had me at “dynamic” shirt above is available for sale in my Zazzle store along with my Architecture Help 5¢ shirt)

The thing is that if you’re going to build polyglot apps, you’re probably going to want the ability to debug polyglot apps as well. I’ve written extensively about building a debugger for IronPython. However, ipydbg uses the CLR debugger under the hood which means you have to have the debugger and the code it’s debugging in separate processes. That’s a huge design burden for building a debuggable polyglot application. Luckily, as of IronPython 2.6, we support Python’s built-in trace debugging capability (aka sys.settrace). While you can use this in pure Python apps (like PDB), you can also use it polyglot C# (or VB)/IronPython apps as well. If only someone were to take the time to build a sample and document what he did along the way…

Seriously, let me introduce you to the worlds simplest Twitter application: GetThings. The app downloads a list of my tweets via the Twitter API and displays them in a list box. The UI is written in C# while the tweet download code is written in Python. Clearly, this is a pretty brain dead app – but the point isn’t to build a great Twitter app but rather to show how to use the settrace API from C#.

I’ve stuck the code up on GitHub. If you want to see the basic app in action sans debugging, start with the initial checkin. As you can see here, basic C# / IronPython integration is pretty trivial. I’m simply creating an engine and a scope, adding the list boxes’ Items property to the scope, and executing the getthings.py file from the disk.

Since GetThings.py is just a text file, the user can modify it to get a list of anything they want – some other user’s timeline, the public timeline, or even – gasp! – something not from Twitter! In fact, as you see below, I’ve actually modified it to pull the tweets from a file on disk so I can avoid hitting the network on every run.

OK, so that’s the basics of the world’s simplest hybrid C#/IronPython Twitter application. Next up, I’ll add the settrace basics.

The information in this weblog is provided "AS IS" with no warranties, and confers no rights. This weblog does not represent the thoughts, intentions, plans or strategies of my employer. It is solely my opinion. Inappropriate comments will be deleted at the authors discretion.